The current state flag design, adopted in 1900, added diagonal red bars in the form of a St. Andrew’s cross so that the banner did not appear to be a white flag of truce or surrender.

Florida’s Constitution modified in 1968 describes the Florida State Flag: “The seal of the state, of diameter one half the hoist, in the center of a white ground. Red bars in width one fifth the hoist extending from each corner toward the center, to the outer rim of the seal.”

Representing the State of Florida, the Great Seal was updated in 1985 to the current seal correcting some errors of the previous seal.

The history and elements of the original and former seals remain in the design. The original seal was established by the Legislature in 1868 after being adopted the prior year in the State Constitution. The words on the seal have remained the same and the basic scene with the Indian woman, the water, palm tree and boat passing in front of a sunset were all present then and still remain today. 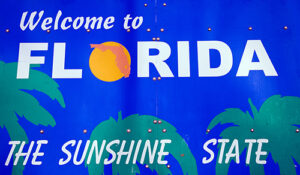 The Sunshine State has long been associated with the sunny state of Florida. It was put added to Florida license plates in 1949 and officially designated in 1970. Other unofficial nicknames include The Orange State, The Alligator State, The Everglades State, The Peninsula State, The Flower State.

State Motto – In God We Trust

The state motto has been on the Florida Seal since 1868 but did not become the official state motto until 2006. Florida adopted the motto making it the same as the United State motto.

Originally designated as the state song in 1935, it was written by Stephen Foster in 1851. The writer never visited Florida and only chose the Suwannee River because he liked the way it sounded in the lyrics. It became a popular song for Florida and was chosen as the state song. Revised in 2008 to remove offensive lyrics.

Florida, Where the Sawgrass Meets the Sky

Originally written as a replacement for the original State Song of Florida, Old Folks at Home, instead was chosen as the state’s official Anthem in 2008, allowing the state to keep the original song.

Cross and Sword is a play written by Paul Green in 1965, that is a musical dramatization of the Spanish colonization of St. Augustine, Florida, the nation’s first city.

On March 3, 1845, Florida became the 27th state admitted to the Union. The Florida quarter was the 27th from the United States Mint State Quarters, minted in 2004. The design that was chosen incorporates 3 significant symbols representing Florida. The 16th century Spanish galleon represents the discovery of Florida. The Space Shuttle represents Florida as being the launching point for the modern era of space expeditions. The Sabal Palm trees are native throughout the state of Florida. The inscription “Gateway to Discovery” represents Florida’s continuing role in humanities search for knowledge and discovery.

The United States Postal Service released this stamp as part of its “Greetings From America” Commemorative stamp series. The design features a retro style that represents postcards that were popular in the 1930’s & 40’s. The elements feature a beach with palm trees and colorful sailboat and a space shuttle lift off.

Key Lime Pie, One of Florida’s Most Famous Foods

Key lime pie originated in the Florida Keys sometime in the 1800’s, though it was not documented as a recipe until the 1930’s. The pie became a staple in key west at that time when there was no refrigeration. The pie was made from canned sweetened condensed milk and naturally growing key limes. It has become a part of the Key West Culture. Why did it take so long to become the official Florida State Pie?

No surprise that Orange Juice is the official State Beverage as oranges are a valuable agricultural product of the state. Fresh squeezed orange juice is readily available almost everywhere in the state of Florida any time of the year. We love our Orange Juice!

Native Floridians know the fragrant blossoms of the orange tree. Driving by an orange grove when these beautiful small white flowers are blooming is a beautiful site. This year, plant an orange tree and enjoy the blossoms and the fruit!

Tupelo Honey comes from the blossom of the white tupelo trees that thrive in the many rivers, lakes and wetlands in the Florida panhandle. It is the only honey that will not crystallize.

Florida was named because of all of the wildflowers that bloom across the state. While the Coreopsis is not native to Florida, it has become the flower of choice for roadside beautification and is now seen by Tourists and Locals year round while driving through areas of the state.

The sabal palmetto palm, aka cabbage palm, is native to Florida and is seen naturally all over the state. It is widely used in landscapes to bring the natural beauty to Florida yards.

The Florida panther is a large cat that is a subscpecies of the cougar.

Even thought the Panther has been protected from legal hunting in Florida since 1958, it is critically endangered. It has been on the federal endangered species list since 1967 and on the state’s endangered list since 1973.

While its numbers have rebounded from a low of about 25 in the early 1990s, there is only an estimated 100-180 adults in South Florida, the Florida Panthers only known breeding population. For more see Florida Panther Fact Sheet by Defenders.org

The Florida Cracker Horse is a small saddle horse, descended from horses brought to Florida in the 1500’s from Spain.

The nickname “Cracker” came because this was the horse used by cowmen who cracked their cow whips in the air.

The American Alligator is well known in Florida with a population of over 1 million in the state of Florida, most of which are in the Florida Everglades. But if there is a body of water in Florida, there is sure to be an alligator.

American Alligators are the largest reptile in North America with the males growing to an average 15ft. The largest reported Alligator killed in Florida was 17.4 ft, reported by Everglades National Park.

The Loggerhead Sea Turtle is the most common sea turtle in Florida. Florida is one of the world’s two largest nesting areas for the loggerhead sea turtle with nesting season beginning in April and ending in September.

Named for its large head, the loggerhead weighs an average 275 pounds with an average shell length of about 3 feet.

Gopher tortoises got their name because of their nature to dig large, deep burrows. They are a protected species in Florida. If you see one, it is against the law to capture, harass or kill them. So if one shows up in your backyard as this one did, just take a picture and leave it alone. 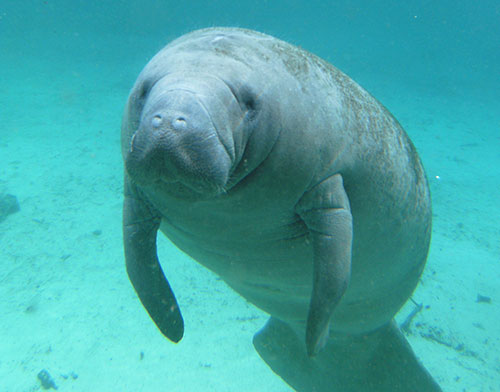 The Manatee is a large aquatic mammal that is found in the warm waters of shallow rivers, bays, estuaries and coastal waters in Florida. They are more widespread in the summer months, but in the winter months, manatees cluster around warm water sources where they are easier to view.

Manatees are a protected species in Florida, meaning view but don’t touch.

The bottlenose dolphin is one of the most know species of marine life. They live in groups and can live for more than 40 years.

Bottlenose Dolphins are federally protected and it is against federal law to feed or harass them.

If you live in Florida along the coast, it is not unusual to see them playing occasionally offshore. 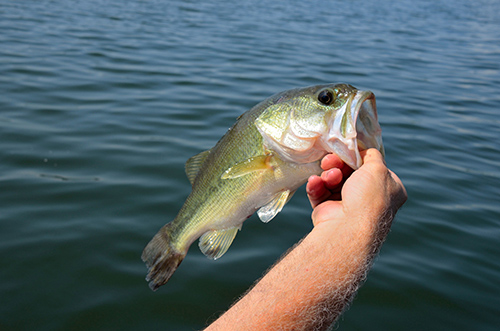 The largemouth bass is a sought after game fish by anglers. Found in lakes and rivers all over Florida, they are a catch & release trophy fish.

Florida is not the only state to designate this fish as the State’s Freshwater Fish. 4 other states have selected the Largemouth Bass as well.

The Atlantic sailfish is a magnificent fish that can swim at speeds of 60+ mph. They are found in warm ocean water, which makes offshore Florida a great place to find them. 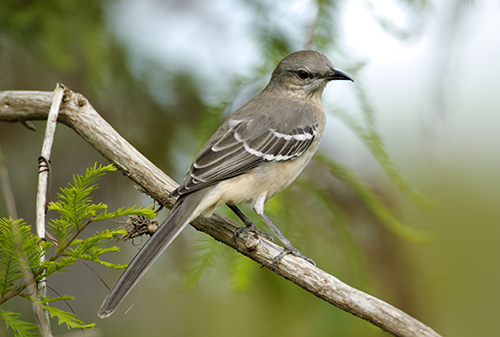 The northern mockingbird is a common bird seen throughout Florida year-round. Named for it’s vocal abilities, they also mimic other birds and sounds.

The zebra longwing butterfly is common throughout Florida. They can be spotted around flowers consuming the nectar and pollen. They are the only known butterfly to eat the pollen and it is attributed to their longer lifespan.

The horse conch can grow to a length of 24 inches and is one of the largest univalves in the world. Horse Conchs are found along the entire coast of Florida, in intertidal flats and coastal areas to a depth of 20 feet.

Myakka (pronounced My-yak-ah), is the native american word for Big Waters. The Myakka soil is a sandy wet soil that occurs on over 1 million acres in Florida. It is the most extensive soil in the state.

More information from the Florida Association of Environmental Soil Science

Agatized coral is a fossilized form of silicified coral. It is found near Tampa Bay, the Econfina river, the Withlacoochee / Suwannee River beds.

The moonstone is Florida’s gemstone by name only. Moonstone is not found in Florida, nor is it found on the moon, but after the 1969 Apollo 11 mission and landing on the moon that launched from Cape Canaveral, Florida, the state legislature chose to commemorate the mission by designating the moonstone as the state gemstone.